Luck despite mistake with ferry. Arrival at Lofoten in the fog. Unusual place names. Island tour and swimming trip in the North Atlantic. 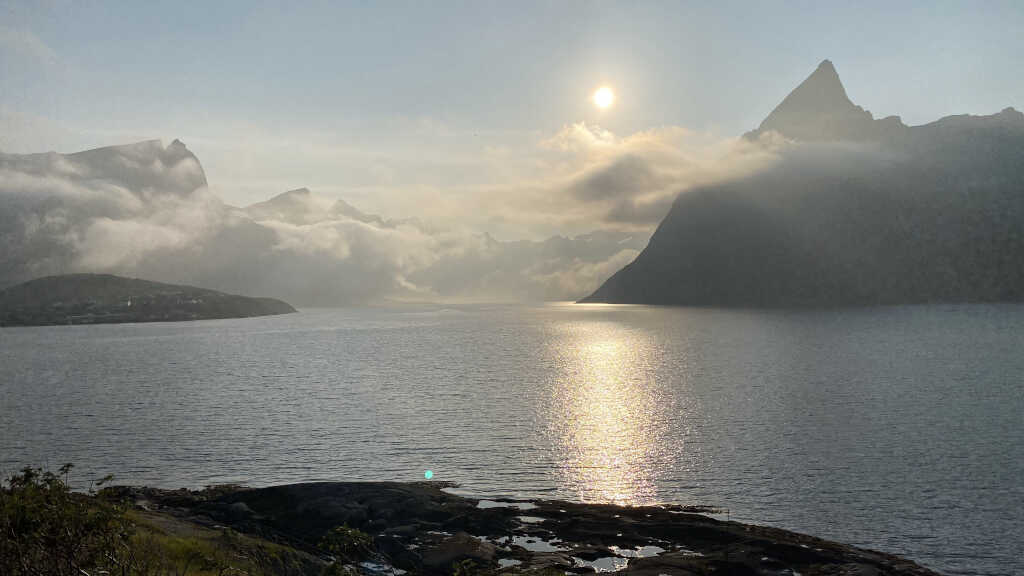 The next day we hit the road in the middle of the night. If this sentence with day and night makes any sense at all, especially since the term night is very relative in summer north of the Arctic Circle. Departure at four o’clock in the morning, anyway.

Why we were on the road so early? Because we want to get our ferry to the Lofoten and have to be there one hour before departure. And probably because I made a mistake.

Thus we are standing in the queue for Værøy at the ferry port early in the morning and realize my mistake, while the cars next to us, the ones for Moskenes, are already being loaded. Our great luck: Both destinations are served by the same ship. The ferry company employee, to whom I excitedly report my mistake, just waves me into the other queue, we don’t have to change our ticket, no bureaucracy whatsoever. Phew … if we hadn’t noticed the mistake or only later, we probably would have been stuck on Værøy for a day.

The Lofoten Islands are a group of islands in the north of Norway, whose four main islands are very close to each other and are connected by bridges. According to the travel guide, the first view to the Lofoten is an unforgettable impression, how the mountains of the islands rise from the sea like a spiked dragon. Well, we didn’t see any of that, again everything was in fog.

Since we have to be back in Munich by a fixed date and don’t want to rush too much on the way back, we only have two nights and almost two days on the Lofoten islands. We try to see as much as possible during this time.

Of course, despite the long days, we did not manage to visit the entire Lofoten islands. We could only drive along the two southern islands Moskenesøy and Flakstadøy. But these are said to cover much of the beauty of Lofoten islands. In the following a few exemplary pictures, which however have no claim to cover the whole variety of the islands.

As next and quasi last program point on the Lofoten we have planned a small hiking tour. Furthermore, swimming in the sea is on the plan, because after all this is the most northern point of our life. That means we’ve got to get in the water!

We start a little southwest of Fredvang and walk towards Ytresand. Before the path goes down into the bay, we turn left towards our actual destination, the “whale bay” Kvalvika.